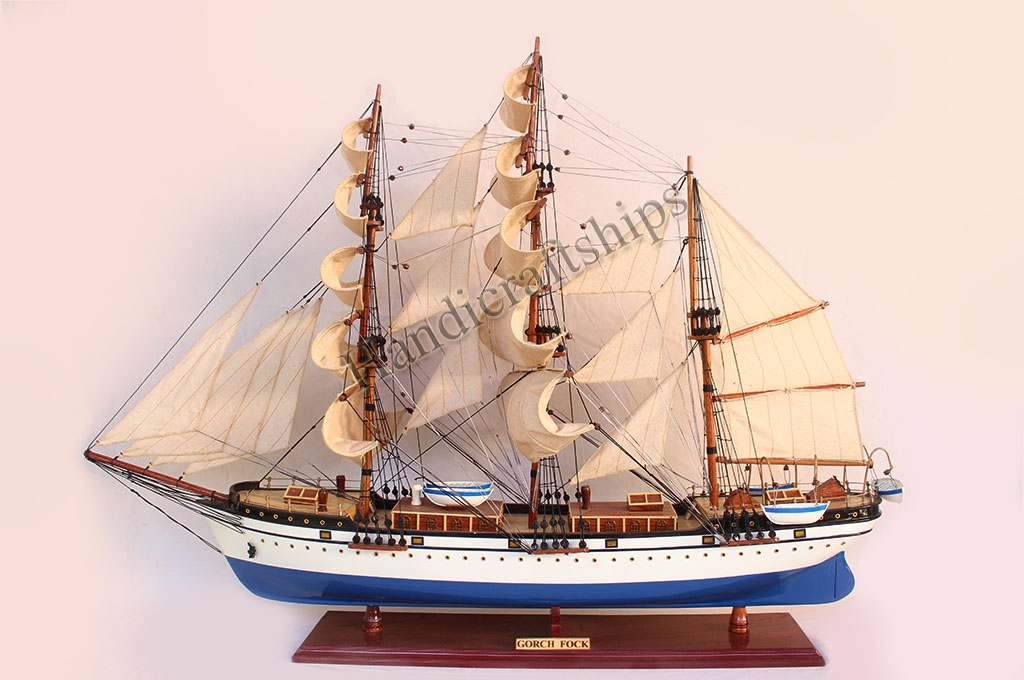 The Gorch Fock is a tall ships of the German Navy (Deutsche Marine). She is the second ship of that name and in honour of the German writer Johann Kinau who wrote under the pseudonym "Gorch Fock" and died in the battle of Jurland/Skagerrak  in 1916.The first Gorch Fock was built in 1933. The new ship was built by Blohm & Voss in Hamburg, launched on 23 August 1958. Her  home port is Kiel. The Gorch Fock was depicted on the 10 DM banknote of the third series (1960-1990) issued by the Bundesbank and is therefore one of the most portrayed ships in the world.

She participates in sailing parades and Tall Ships’ Races, where she is in amicable rivalry with the Italian vessel Amerigo Vespucci, and has undertaken hundreds of cuises including one tour around the world in 1988. The Gorch Fock is now under the command of the Naval Academy in Flensburg-Murwil.

· Our model ship is entirely  handmade by skilled and experienced craftsmen, using the plank on frame construction method

· Ready for Immediate Display - Not a Model Ship kit

· Anchors, guns, decorations, and other intricate details sculpted of metal

· Meticulously sewn sails, keep shape and do not wrinkle

· Use high-quality wood such as rosewood, ebony, black wood, mahogany wood.... all will go through processing step pre-construction.

· Gorch Fock model ships are build according to scale through original plans, drawings and paintings as well as actual photographs ensures the highest possible accuracy.